Mr Browne qualified from the Royal College of Surgeons in Ireland. He completed his postgraduate degrees at the Royal College of Surgeons London and the conjoint colleges of Surgeons of the UK and Ireland, and then later went on to obtain his Master in Surgery from the University College Dublin. After training in the UK, he then went to the Royal Perth Hospital in Australia to train alongside Michael Lawrence-Brown and Mr David Hartley - a world-renowned endovascular team.

During his time in Australia, Mr Browne invented the fenestrated endovascular graft which has now been used in more than 7,500 patients around the world. Moreover, he was one of the first surgeons ever to use endovenous techniques for the laser treatment of varicose veins.

He is currently the head of the Vascular Department in Broomfield Hospital and helped develop the hospital's vascular unit. He also launched The Out to Africa (OTA) charity which is a project connecting staff and departments within Mid Essex Hospital Services NHS Trust with their peers at the University Teaching Hospital (UTH) in Lusaka, Zambia.
Read more 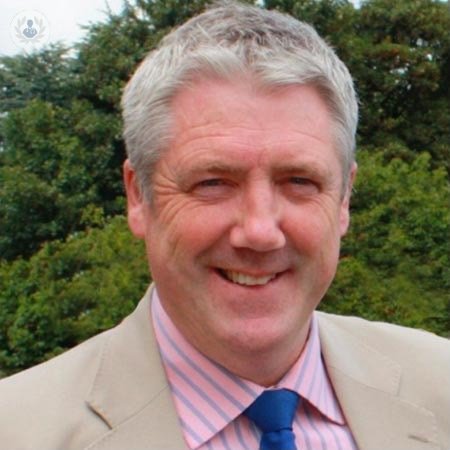 What are varicose veins? Varicose veins are enlarged and swollen veins, usually forming in the legs and feet. Often they can appear as lumpy, b...

What is it? An aortic aneurysm is an abnormal, progressive and permanent dilation of part of the aorta, the largest artery in the body. The dil...

Carotid endarterectomy surgery or carotid artery, is a type o...

All staff and consultant have been kind and considerate, especially during the stressful times of Covid. Thank you

I had an excellent experience with Mr. Browne, he carefully explained every aspect of the operation etc. to me, took time to answer my questions and ensured I understood the risks. he saw me before and after the operation with follow up 1 month later.

Nothing but praise for Mr Browne. On my initial consultation he explained the cause of my problem, the surgery required to repair it and the expected outcome including any associated risks. I would highly recommend Mr Browne to anyone.

Absolutely amazing experience. I received the perfect treatment from day one. Highly recommended!

Mr Brown is an excellent vascular surgeon and I highly recommend him and his staff! From the very first stages of my journey to my post op examination it has been trouble and pain free! Tremendous service!

I have been in the care of Mr Browne twice and I trust his professionalism and care to the maximum !!

Mr Brown is very professional, friendly, and accomodating as is all his staff.

Very pleasant and professional to talk to certainly would recommend h

Any cookies that may not be particularly necessary for the website to function and is used specifically to collect user personal data via analytics, ads, other embedded contents are termed as non-necessary cookies. It is mandatory to procure user consent prior to running these cookies on your website.